Carol Clark is a medical doctor turned dog behavioural expert. She's written four books (so far) and this is her story... 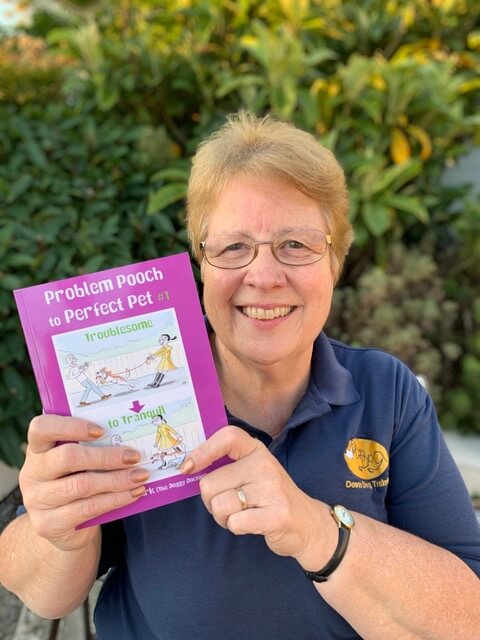 "I needed to know more about how to write a book and how to make it really good..."

A long time ago, I wrote my very first book, Pesky Puppy to Perfect Pet. It was very much just writing down the sorts of things I told people every day about how to bring up a puppy and avoid behavioural problems.

I was just so fed up of saying the same things about puppies over and over again to clients. I thought it'd be a lot easier to write it down in a book and give it to them. Yes, we had help sheets and things, but bits of paper get lost; people don't keep them. So a book seemed the sensible way to do it.

I didn't realise at the time how much writing a book would help grow my business and cement me as an expert.

My first book was a very good puppy bible for those getting a new puppy...

But I was aware, having listened to Vicky's talks, that I needed to know more about how to write a book and make it really good. So I worked through her online self-study Published In 90 Days course. I was lucky enough, too, that Vicky let me be a beta reader for How The Hell Do You Write A Book, and it is truly excellent. So good to read.

I wrote my second book in summer 2018 using a lot of what I learned from the Published In 90 Days course: Chaos to Calmish, Diary of a Pesky Puppy's First Year. It was really just an adaptation of the diary I kept for my own dog when I got him.

"I wrote it much more quickly than the previous book..."

But my third book, Problem Pooch to Perfect Pet, is book one in a series of probably three—and I really have used everything you taught through the course and in your wonderful book, which made it a lot easier to write my book.

I wrote it much more quickly than I'd written the previous one. Not in 90 days, I have to admit—it did take a good six to nine months. But we got there. It took me about six months to write it, then three months to tidy it up and publish it. It's amazing how long those last few steps can take, actually. It's important for people to realise and think about.

You know, people are always amazed that you've written a book, as if it were some amazing thing. But actually it's not. It's not that difficult to do if you actually know what you're talking about. And anybody who's worked in any area of anything for a decent length of time should know what they're doing.

Then all you have to do is write.

The most difficult thing is realising that what you've got to say is still important, even though there may be plenty of other puppy books or dog behaviour books out there. There are other books on dog behaviour, but my book is different from most others because I deliberately made it different.

And it's my book, my voice, my experience—and that's what makes it important to me. I am getting older and I won't be here for ever—but my books will be, and that's a lovely thought.

"Where do you even start?"

When I wrote the first book I thought I'd just get it printed locally by local printers and that sort of worked. I've still got a lot of copies, which we give out for free as part of our puppy packages and as rewards.

I did so many things so wrong, though. I started writing without any real clear plan. I knew vaguely what I wanted to say, but I hadn't written it down. I hadn't written an outline so it took an awful lot longer than it should've done to write the book.

When I wrote a chapter, for example, I'd go through it and realise I'd forgotten to say something. Whereas with the other books, I had an outline. For my most recent book I had a very clear outline and that made writing a lot easier.

Problem Pooch to Perfect Pet is probably twice the length of the first one, but I wrote it in half the time and because I planned it properly, which is something Vicky teaches in her course and talks about all the time. Vicky is quite right. It does make it so much easier.

Before I started the course, I was worried. I'd already written a book, so how was it going to help me? Especially the first bit, which was all about why you should write a book. I thought, 'Well I've done that so do I really need this bit?"

But there's gold in there. Even in those early chapters. It's important and I'm actually working through it again now because it's been updated and there's a load of new stuff there as well. And it's just still really helpful and really practical.

I don't regret paying for it at all. It's really good.

But it isn't. That's very much the start. There's so much to do after that.

I would suggest that if you're thinking about writing a book, do one of Vicky's courses, and buy her book because the book says it all and it really is a super complement to the course.

It's reassurance that this is a journey everybody can take and everyone will hit these sorts of barriers and have these sorts of questions—and these are the answers. That's the most useful thing about it.

And, of course, working with Vicky gives you what you need to be able to write and publish your own book.

If anybody's thinking about writing a book, then get How The Hell Do You Write A Book, do one of Vicky's courses. No question.
http://www.downdog.co.uk/Pubs 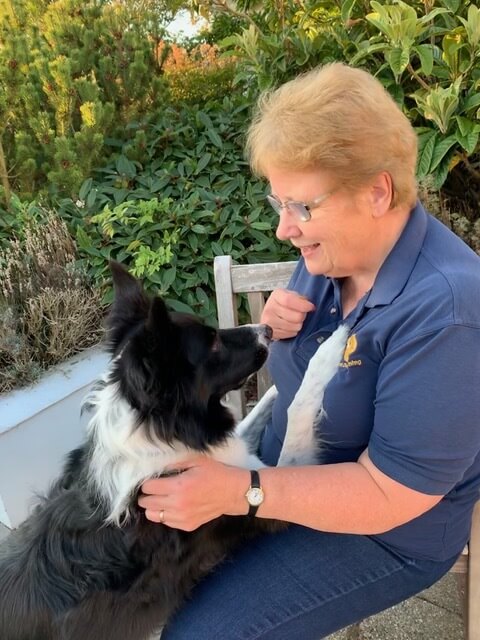 You can buy a copy of Carol's books from her website:

As a child, Carol wanted two things. The first was to be a doctor. The second was to have a dog – but her parents said no. She worked hard to achieve aim number one in 1981 and eventually worked in various medical jobs at senior level in the NHS.

Having married another doctor, she achieved her second aim: getting a Border Collie called Ben in 1983. Several other dogs followed and Carol learned a lot about training dogs. Later, she taught at a local dog training club. Some years after that, she took on a dog with severe fear aggression. To help him, and to avoid being bitten so often, Carol trained as a dog behaviourist, too.

In 2008, after seven reorganisations in 11 years, each requiring her to reapply for her own job, Carol got fed up. She took early retirement and relocated to the beautiful Ards peninsula in Northern Ireland. Being easily bored and wanting a new challenge, she set up Down Dog Training and Behaviour.

Carol has over 35 years' experience of dog training and behaviour work and there's not a lot she hasn't seen or done by now. She has the honour to be the first Kennel Club Accredited Instructor for Companion Dog training (at advanced level) in Northern Ireland, and the first and only Kennel Club Accredited Instructor in Behavioural Training in Ireland. She holds the Advanced Diploma in Canine Behaviour Management (with Distinction), is a Guild of Dog Trainers Master Trainer (GoDT 138) and is a Qualified International Dog Training Instructor. Her passion is teaching people how to understand, train and help their dogs so they can have a perfect life together.

I'm on a mission to create 1,000 business owner-authors and help them transform their lives and businesses. Join us: pre-order your copy of How The Hell Do You Write A Book? today.

Click the button below and you'll go straight to the order form. Fill in your information and you'll get access to your pre-order bonuses immediately – and I'll let you know when your book is on its way!