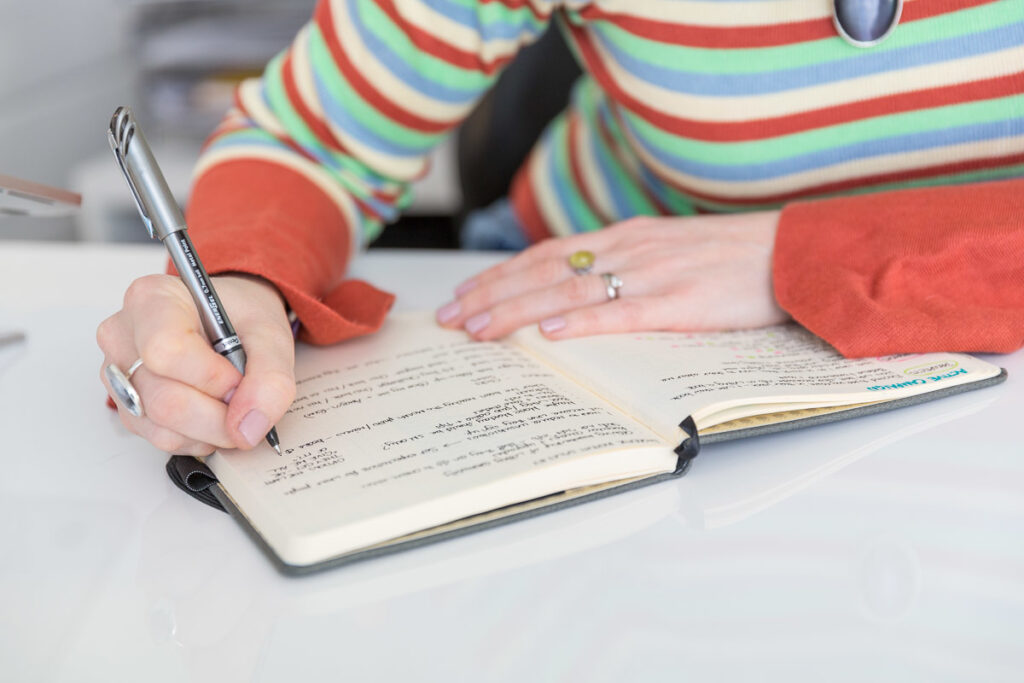 On Keeping a Notebook

I stare at the scribbled sentence in my notebook, biting back a giggle. I’d almost forgotten.

Back when Joe and I were first married, the first time we stayed over at his parents’ house oop north, I received an induction into “first on the right”, “hot-cold custard”, and advanced porridge spinning.

Joe and his dad were advanced porridge spinners; his mom simply smiled, rolled her eyes with love, and got on with eating her breakfast.

It goes like this, you see: Joe’s mom makes porridge on a Sunday morning before they go to Mass, and we all eat together. The porridge is spooned into a bowl and various accoutrements await on the breakfast table: a jug of milk, sugar, honey, a pot of tea. You sprinkle sugar onto the porridge so it forms a crust, then gently—GENTLY—and slowly, pour the milk into the gap between the crusty rim of porridge and the bowl itself. Get it right, and the porridge floats. Get it very right, and you can spin your porridge.

Advanced porridge spinning is where the porridge-muncher carefully takes spoon-slices out of the edge of the spinning porridge without sinking it. Eventually, the expert is left with a single small iceberg of porridge flipping around in a lake of milk, to be scooped up neatly with a spoon.

I don’t have the focus or patience for this (I’m pretty sure I’d have failed the Marshmallow Test); but Joe is an advanced porridge spinner. So was his dad.

This little piece of family delight nestled in my notebook until recently. When I read it, it immediately brought that first breakfast with my new family rushing back.

I have so many more snippets in that notebook, and in many other notebooks since. And in the voice notes on my phone. And the Notes app. And on my camera roll. They’re little memory joggers; never the full story. Just enough to remind me of what I was thinking and what I saw or heard. I don’t always save enough detail and some of the entries are baffling now (for example, I have no idea why I wrote this down or where I heard it: “the Doubt Bunny will start nibbling at the carrot-patch of your awareness”).

My notebook is my most valuable tool. If it ever goes missing, I’ll be devastated—and inside are my details with a reward offered. I’ll happily pay a reward for its safe return, because that’s where my memories and ideas live.

We always think we’ll remember something but most of us almost never do. Even in the space between getting out of the shower and finding something to write with, I’ll forget. My notebook goes everywhere with me, and I have several stashed in different places—by my bed, in my bag, on my desk, in the house by the sofa, in the car… it drives Joe around the bend. But I know without them, I’m lost. So are my ideas, and my memories, and my stories.

Because that’s the purpose of a notebook; to capture stories and ideas. Little snippets overheard between two people in a café, or on a train. An argument behind a door. Some unexpected street theatre. The way the light falls on a leaf just so, reminding you of something long past, and a story to tell.

If you can, keep a notebook. Keep it in different forms and in varied places. Never go anywhere without the means to record a thought or an idea or an event because you will not remember it later; not in the detail you want and need.

Be the weirdo in the corner of the room frantically recording what’s going on around you. Take it everywhere, all the time, and you will never run out of ideas.

And when you do scribble down your note, give it a little context: date, place, time, your feelings, and why it’s important enough to be remembered.

Even if they don’t turn into pieces of writing for other people, they’ll create a tapestry of your life and thoughts for you to weave together and colour in later one.

And one day, when someone you love has just died, you’ll read an entry like “advanced porridge spinning” and it will make you laugh, and cry, and remember.