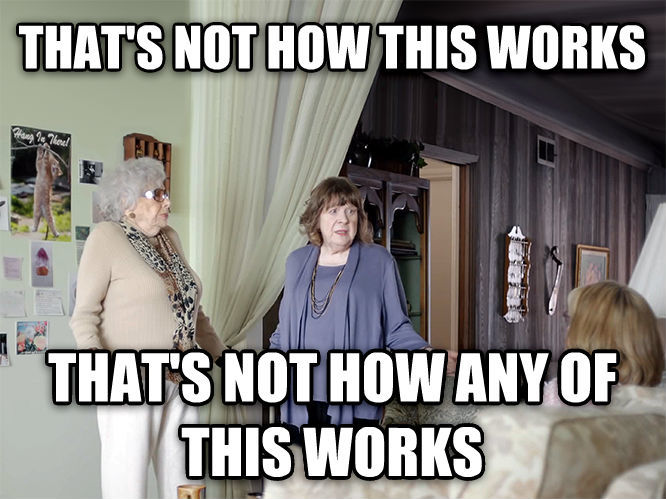 I was having a crisis—a legit existential crisis.

I contemplated all sorts: ending my job, my life, all my relationships, my tea subscription.

And then I went on an online therapy workshop, got up early and walked out my thoughts, and I’m all better!

Has that ever happened to you?

Of course it bloody hasn’t.

I’ve just finished reading Phoebe Robinson’s Please Don’t Sit On My Bed In Your Outside Clothes (awesome book and great title that I 100% agree with) and in one of her essays she talks about this problem with stories.

How Hollywood and the media, and the continued teaching of the hero’s journey, make us think we’re gonna solve all our problems really fast and everything is really simple.

The hero in a film will have crashed around causing all kinds of harm to those around them, until they have an epiphany—at which point there’ll be a big long speech that magically undoes all the hurt they caused, and then everyone lives happily ever after and nobody speaks or thinks of all the horrible things they did again.

Or you go on a much-needed holiday after burning out, and you’re fixed. No more mental health issues and your problems are solved and you’re better.

Or you have one row in your perfect relationship, then you make up and have incredible make-up sex, and everything is fine, and you never disagree again.

But—and I know you’ll be as shocked to hear this as I was—that’s not how life works.

Gimme one example of when you’ve solved a messy life problem with a single, one-time, hero’s journey type fix. Go on. I’ll wait.

Life is nuanced and we live in the messy middle, not on the extremes. We don’t prepare kids well for life because we don’t talk about this stuff and so they think life is simple and easy and black and white and binary, and it’s not.

Social media exacerbates this because in a 280-character tweet or a 2,000-character Instagram post there’s little room for nuance. They’re perfect for hot takes, though—which perpetuates this idea that things are binary and simple—this thing or that thing. Right or wrong. Just do this one thing and everything will be magically fixed.

It is all-but-impossible to write—to think—fully about something in a 280-character tweet or a 2,000-character social media post or even a 2,000 word article, so instead, what we get are hot takes. Soundbites. Binary opinions that do not reflect reality or in any way make anything better.

Do we have to chime in?

And yet, I get it; there’s a lot of pressure to reply now and give our own hot take on what’s going on because before we know it, the next crisis has rolled around and demands our attention and we do not want to be left behind or thought a fool or—worse—that we are indifferent to other people’s suffering.

We feel like we have to say something about each new crisis, even if we know nothing about it—because otherwise it’ll look like we don’t care. Which is why so much of the noise out there is performative nonsense.

When we see everyone else’s hot takes and demands for action, we feel guilty and ashamed and scared and helpless. All those feelings are fine; we can’t do anything about them. We can’t stop them. We have little control over them.

But we do have control over how we react to those feelings and what we do next.

Here’s the thing: we don’t have to say anything about anything.

More than that: if we don’t know a lot about a situation, we shouldn’t bellyflop in with our hot take. It doesn’t help the people that need helping, and it sure as hell doesn’t help us. All it does is add to the white noise.

Instead, we could direct our energy into learning more about the things we give a shit about. And we can continue to put our energy into helping the people we already help—those who come to us because our superpower is helping them get into their zone of genius, or fix their problem, or achieve their goal.

Back to writing and creativity

Which is why we need more nuanced stories, more people willing and able to share the details of their lives and businesses and struggles, so we can see how things really are.

The messy middles as well as the “overnight success”.

A life lived in grey areas, with the generosity to share the fuckups as well as stuff that shows us in a good light, is far more valuable than a Hollywood sanitised hero’s journey, or the latest hot take on social media.

Which is really hard because we’re conditioned from birth to always put on our best faces and never show vulnerability or “weakness” and never let anyone see your crown slip. But that’s not realistic or honest or kind.

So how do we tell these stories?

How do we get at the bits in the middle and really think about things, think about solutions, about how to change hearts and minds? Because yelling at people that they’re wrong and we’re right ain’t gonna get it done. And persuading people to spend time reading and thinking is really hard, too.

I’m not sure what the answer is, but it won’t be found in soundbites in social media. It’ll be found through listening to real stories from lots of different types of people who share the whole process, not just the shiny golden result.

The binary this or that; one thing or the other; you’re either right or wrong—it kills creativity and critical thinking.

Creativity breakthroughs and big ideas almost never lie at the extreme outer margins, despite appearances—but the extreme opinions are the ones that make the most noise, so we give them disproportionate attention.

Life, big ideas, critical thinking, and creativity all happen in the messy middle

They thrive in the grey areas of reality—but that’s not as sexy as someone shouting a soundbite at us. It’s hard to sell the grey areas when they can’t be packaged neatly into a shiny tweet or a colourful Instagram square.

Believe me when I say there are people out there craving a more nuanced take on the world. There are so many of us who are sick of the knee-jerk noise; we desperately want informed opinions. Stories that dig deep. People who are willing to dive into the messy middle and start sorting through all the strands that make up any given crisis or event.

To do that, we need to write beautifully, persuasively, emotively, thoughtfully, passionately.

There are people—me included—who want your take on your area of expertise, and we won’t get that from a social media post. We might not even get it from an article.

If we allow ourselves to float over the hot takes and kneejerk reactions, and give ourselves time to think, our creativity will fly.

Feel your feelings; they’re gonna hit you in the face whether you want them to or not. But take a moment after you’ve stood up straight again to consider:

Now apply all this to your writing. To your zone of genius.

Go deeper and write your story with nuance and uncertainty and questions. Admit that you don’t have all the answers and that’s okay because we’re all searching for them.

Give people a story they can use.