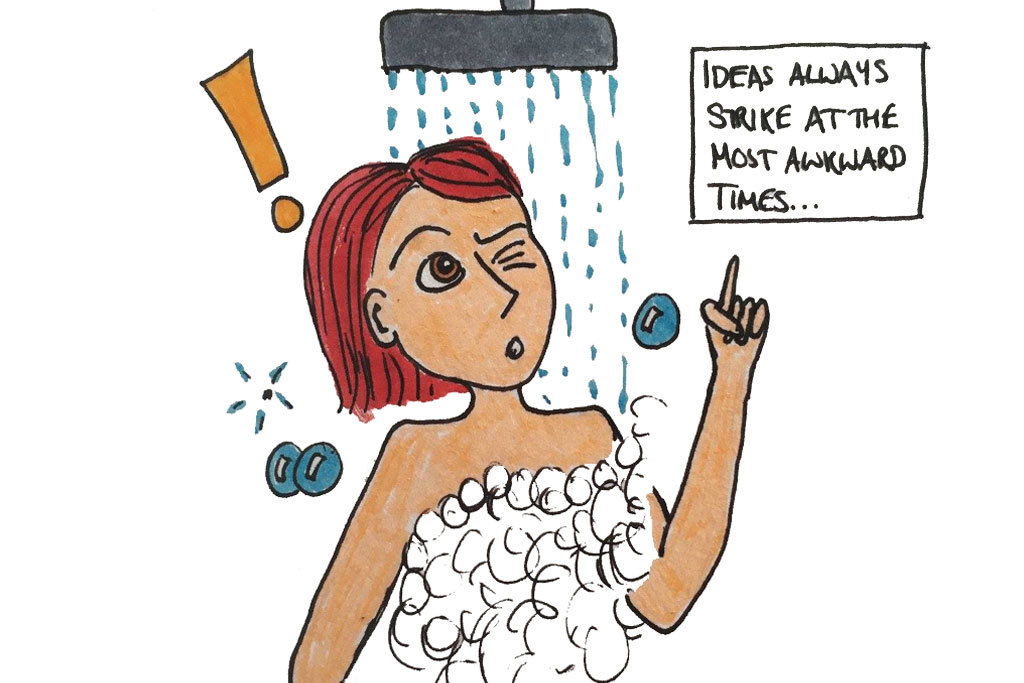 How Do You Come Up With All Your Ideas?

Ever look at those snazzy business owners in your inbox and on the internet and wonder how on earth they come up with all their stories, emails, articles, and podcasts?

Wonder no more—you can do that too.

The world is made of stories; you just need to go out and find them.

Listen to the Podcast:

Get Stuck into the Article...

Ever look at those snazzy business owners in your inbox and on the internet and wonder how on earth they come up with all their stories, emails, articles, and podcasts? Wonder no more—you can do that too.

The secret is simple: be fascinated by everything.

‘But wait, Vicky. What do you mean “be fascinated by everything”? Some stuff is boring. And how will that help me anyway?’

Fair question. Except for the “some stuff is boring” part. I believe there’s a good story in almost everything… which brings me to what I want you to do. I want you collect stories.

My client, Drayton Bird (yeah I just dropped that name) says in his soon-to-be-released autobiography, “I’ve got some sort of a warped mind because I find just about everything interesting. That is, everything that isn’t clearly boring.”

Same here. I have the same kind of warped mind.

So in this week’s article, I’m going to share with you a bunch of secrets about how never to run out of things to say and stories to tell.

I never fail to be baffled (and roll my eyes) when I hear someone say they don’t read. Ever. And if they say it with pride, I feel sad for them. If you want to be a good writer, you must read. Must.

The equivalent is a chef who says they don’t eat. Or a dancer who doesn’t listen to music.

Read varied stuff in all sorts of genres. And, particularly, read Bertrand Russell’s History Of Western Philosophy because it’ll teach you how to think, which many people can’t seem to do well.

I want you to read because by reading, you’ll discover what works and what doesn’t work when it comes to writing. You’ll get new ideas that’ll spark ideas of your own.

Don’t worry about being overly influenced by other writers; you won’t be, not if you keep writing yourself. You may absorb some of their style, but it will become part of your own style. Anyone who says they’re not influenced by anyone else is flat-out lying.

2. Start a collection of something.

When I was a child, I collected stamps. (I have always been a nerd.) I loved the stamps because some of them were tiny works of art… but I also loved learning about the history of countries and names and places.

I remember having Rhodesian stamps in my collection and being confused, because as far as I knew, there wasn’t a country called Rhodesia. Actually, as I found out through my love of philately, there never was. Rhodesia was an unrecognised state in southern Africa until 1979, when it more-or-less became Zimbabwe. That led me to learn a little about the fairly horrifying history of British Colonial—European colonial, I guess—times.

Start a collection of something; you never know what you’ll learn and what stories may come out of it.

3. Don’t overlook the ordinary or mundane.

You don’t get much more mundane than Post-it notes, right? Ubiquitous little sticky squares of paper that get everywhere? Do you know how they were invented? A guy at 3M was trying to make superglue, and Post-it notes were one of his failures. The glue wouldn’t stick anything together.

But it did peel off and restick again and again.

Post-it notes were a happy accident that made 3M billions.

Everything has a history and there’s a story in almost everything.

I really mean, try something creative you wouldn’t otherwise do. Like Dungeons & Dragons. Yep, I play D&D. Get over it.

Every week, I meet with some magnificent fellow nerds and we create characters, story arcs, backstories, and quests. You don’t get much more creative than that.

Travel is fantastic; but there’s something special about travelling alone. You’ll meet and talk to far more people if you’re alone than if you’re in a couple or a group.

When you’re with your parter or a friend, you look inwards. You talk to each other and experience the world through that lens.

I’m currently learning to play the guitar and speak Spanish. And I started to learn Japanese but I got scared.

Learn something new and you’ll have endless stories to tell. Like how important it is to warm up before playing the guitar: cold fingers do not move how you want them to move, and then you end up swearing.

If you learn something new, you don’t just gain a new skill; you gain access to a different world, a different culture, and new people.

Or, more precisely, listen to them. Strike up a conversation with the person in the queue behind you. Spend the afternoon with your grandparents—or borrow someone else’s if yours aren’t around anymore.

I wish I’d talked to my Nana and Grandad more; I loved hearing Nana’s stories about walking five miles to school across the fields every day (which I trot out every time someone in a Chelsea tractor drives their child half a mile to the school gates).

My Grandma tells me wonderful stories about her life when she was young: there were as many horses as cars and very few people had an indoor bathroom. She went dancing every Saturday and Sunday night, and wrote to my Grandad when he was away in the war.

Take out your earphones and listen to people’s conversations. You’ll gather some of your best stories that way. And you’ll learn a lot about people and how we work… which you’ll need if you want to sell stuff to them.

Take a notebook and pen everywhere. And a camera. Photograph interesting posters, pictures, graffiti, pages of books, and advertising. Scribble notes about people’s interesting overheard conversations. Watch films and TV shows and read books, and note down the parts that move you.

10. Go undercover in your industry.

Be a mystery shopper and find out what it’s like from the customer perspective. This may seem obvious, but so few people do this. If you do it, you’ll have an edge when you write your book—and an edge when it comes to selling your products and services.

11. Do absolutely nothing at all for a couple of days.

If at all possible, do it in a treehouse. Turn off your mind and let it wander. Sit and listen to the sounds around you.

When you switch off your mind, that’s when it makes creative connections.

There are loads more ways to make sure you never run out of ideas, of course… but I reckon these are the easiest to actually implement.

Go forth and find new stories. Then use them to write your own.